URBANA – The University of Illinois at Urbana-Champaign’s saliva-based COVID-19 test was never conducted despite previous claims it did, an FDA spokesman told the Illinois Newsroom.

Since July, the U of I has been using a COVID-19 test it developed to test all students and staff at least weekly in hopes of safely reopening the Urbana campus. Saliva samples are analyzed in U of I’s own laboratories. To date, more than 400,000 COVID-19 tests have been performed. Since the beginning of the semester on August 24th, more than 2,000 positive COVID-19 cases have been identified as part of the campus test program.

On August 19, campus officials announced in a press release that the U of I had begun its saliva-based test under the umbrella of an approved FDA emergency clearance. Illinois Governor JB Pritzker held a press conference the same day to share the news.

In response to questions from the Illinois Newsroom about the EUA status of U of I’s saliva test, an FDA spokesman said in an email: “The University of Illinois is not licensed under one umbrella and does not have an EUA.”

People are lining up at one of several test locations at the University of Illinois on the Urbana-Champaign campus to get tested for COVID-19. Faculty, staff, and graduate students must be tested for the virus at least once a week to enter campus buildings, while students must test twice a week. Lee V. Gaines / Illinois Newsroom

In a statement emailed, Robin Kaler, a spokesman for the U of I campus in Urbana, said the faculty and staff relied on an email from the FDA dated Aug. 5 stating that the Campus could conduct a “bridging study” comparing the effectiveness of their own saliva test to one approved by the FDA.

According to Kaler, the university compared its saliva test to one done at Yale University, which received FDA approval for emergency use on Aug. 15. Upon completion of the bridging study, the University’s Regulatory and Compliance Advisor told the faculty and administrators that they could claim the university’s COVID-19 test was conducted under the umbrella of the test created by Yale University.

According to Kaler, the FDA reached out to the U of I by phone earlier this month asking the university to stop using the terms “bridging study” and “umbrella”. At this point, the university updated their language to remove references to their test, which was conducted under the umbrella of an FDA-EUA test.

“We immediately updated the language to match their direction,” Kaler said in an email. 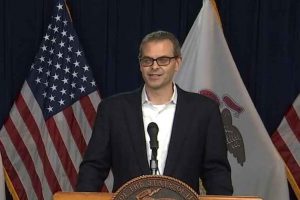 The U of I’s August announcement claiming the test had received FDA approval, which received a variety of media coverage, including from the New York Times, CNN, WebMD, and Science, both locally and nationally. (Illinois Newsroom also reported on the announcement and has since corrected the story.)

At a September 28 press conference on the Urbana campus, the Illinois Newsroom asked U of I chemist Martin Burke, who helped develop the saliva-based COVID-19 test on campus, if he had spoken mistakenly when the University announced the test had received EUA status from the FDA.

Burke said that when the announcement was made it was “totally in line with our understanding of the [federal] Guidelines at the time “that guidelines for laboratory developed tests had changed since then and that the university continued to work towards EEA approval for its COVID-19 test.

During his press conference on August 19, Governor JB Pritzker praised the university for its testing efforts and reiterated the claim that the test received EUA approval from the FDA.

A Pritzker spokeswoman did not explain why the governor claimed the test was granted EEA status during the August 19 press conference. In a statement emailed to the Illinois Newsroom on Sept. 29, she wrote: “At the time of the announcement, the University of Illinois had completed a successful bridging study on a pre-existing EEA and confirmed to the federal government that it had followed All Steps required to do the saliva test. If the regulatory situation has changed since the announcement, these questions should be answered by the University of Illinois. “

Tim Killeen, president of the U of I system, reiterated Pritzker’s testimony on Aug. 19, saying that “FDA clearing” the saliva test allows the U of I to “turbo-charge” efforts to get use of tests not only in other locations, but also in K-12 schools and other public and private institutions. In August, the U of I announced the creation of a new organization, Shield T3, a limited liability company that the university established to expand its testing technology nationwide. The web post announcing the number of board members for the T3 initiative as well as on other campus websites said the saliva test was being conducted “under the umbrella of an Emergency Use Authorization approved by the Food and Drug Administration.” becomes.

Burke, the U of I chemist, told the press conference on August 19 that the U of I test was similar enough to Yale’s SalivaDirect test that “we are doing a bridging study and operating under the umbrella of this FDA EEA could … Our test was even more sensitive (and) this enabled our CLIA certified lab manager to provide us with a roof cover under FDA EUA approval from the Yale team, as our bridging study showed that our assay was not inferior . “

(A CLIA certified laboratory refers to a clinical laboratory regulated by federal agencies such as the FDA, CDC, and the Centers for Medicare and Medicaid Services.)

Yale researcher Nate Grubaugh, who helped develop SalivaDirect, declined to comment on the matter, only explaining via email that he thought U of I’s saliva testing program was “excellent” and that the campus “will likely save many lives”.

The language in U of I’s press release about the FDA status of its saliva test remained unchanged until at least September 1, according to snapshots from the Wayback Machine digital archive website.

The snapshots indicate that a change was made in the press release between September 1st and 25th. Without changing an explanation on the website, the campus changed the wording to no longer claim the saliva test was conducted under FDA approval for emergency use.

It is now said that the campus has “validated its lab-developed test under CLIA by successfully comparing its performance with an FDA-approved emergency test.”

Although federal guidelines mean that U of I’s CLIA-certified lab no longer needs to work toward emergency FDA clearance, Burke says the campus continues to work toward that goal as it will make it easier for other labs to take the test and run it it is generally available across the country. “

So far, campus officials have said the U of I has been contacted by 35 organizations, including other universities, to express an interest in accepting the campus’ shield program, which includes testing, contact tracing and other mitigation measures.

Other CLIA-certified laboratories can use U of I’s saliva-based COVID-19 test before it gets FDA approval, and some have already done so, says U of I chemist Paul Hergenrother.

The updated federal guidelines just mean that labs can now use lab-developed tests like U of I’s saliva-based test and “operate indefinitely under the approval of the CLIA director,” Hergenrother says. “The [emergency use authorization] only formalizes the protocol. “

Lee Gaines and Christine Herman are reporters for the Illinois Newsroom. Follow them on Twitter: @LeeVGaines and @CTHerman

Coronavirus in Illinois Updates: Here is what occurred to COVID-19 within the Chicago space on January seventh